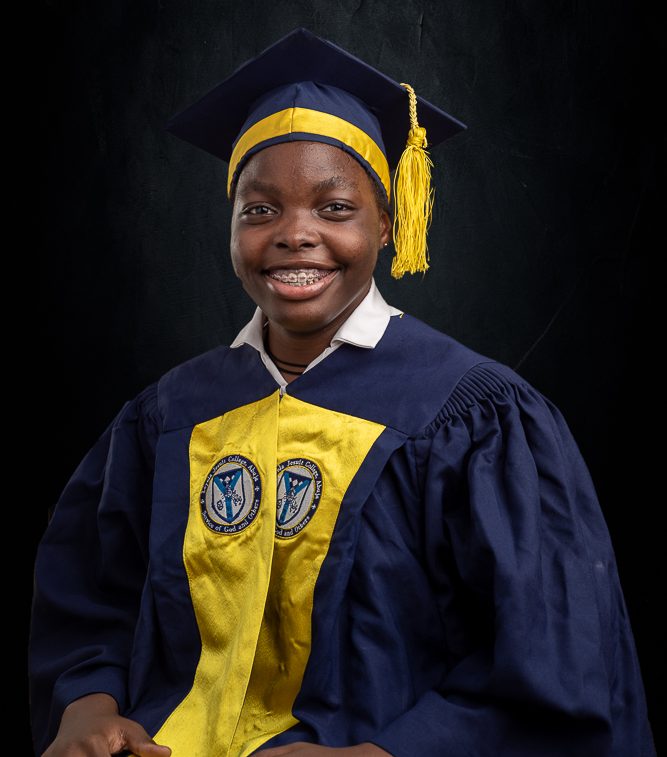 The President, Principal, Vice Principals, Special Guests, Distinguished Staff, Joyous Parents of the Pride, Virtual Attendees and My Fellow Graduates. My name is Uzoamaka Emily Ozo-Udeze and I am greatly honoured to deliver this valedictory speech on behalf of the set of 2022. First, I would like to acknowledge those whose words I speak: Morounfoluwa Ayoade, Chukwudi David, Mobadewa Atanda and of course, me.

Every valedictory speech has a niche: a distinctive quality that leaves members of our community discussing for weeks after. Finding one that fit us in just a few days was a daunting task, but today, Ladies and Gentlemen, today marks the end of a well-played, prolonged, enthralling game of chess. Let me explain this to you.

I remember sometime during the NECO, Charis and Fred playing chess as per usual in D Class (at least before Sister ID seized their board) and it got me thinking about how our stay in LJC has been very much like that: a chess game.

The beauty of chess is that it can be whatever you want it to be. In this case, it’s a story. A story about a journey. A journey we began six years ago. A very wise man once said, the journey is as important as the destination; as such, let me take you back to the day we began this game of chess.

A typical chess game starts with some sort of formation in mind for instance the Isolani Formation or the Maroczy Bind, but coming in newly in JS1 the only formations I knew were 4-4-3 and 4-2-1-2 (I was completely unprepared for what lay ahead of me) and, as Jeffrey and Ebosa’s unending tears indicated, I was not the only one.

JS1 was all about making new friends, fitting in and settling down. We gained a name for ourselves in the junior block as one of the noisiest sets, second to the set of 2021 although we were only 96. In JS2 we got juniors and swore to treat them as badly as we were treated. Lmao, we thought it was a rite of passage.

We  revelled in the glory of being rebellious, well, that was up until our JS3 when it was decided the urinals in the boys’ toilets were not enough and more air was needed in dorms so the louvres had to go. Unlike a lower-stakes chess game, this cost us more than just a pawn or two. In fact, it cost us a few of our knights and bishops too. We could never live this down…. or so we thought because as Bernhard once said ‘in chess, one bad move nullifies forty good’.

But, as in every chess game, the more pieces you lose, the more focused and determined you become. All seemed lost and broken but we kept towing, for when the going gets tough, right there the tough get going.

This was the case with us. In senior class, our opposition introduced some heavy hitters such as OJ and Ogbonium, and the new and improved 75% programmes. Little did we know we had only been facing their pawns.

With this, we buckled up. We stopped shouting ‘I wanna checkmate somebody’ and started saying ‘We’ve wrapped’, ‘Packs for boys’, ‘Freaking sechech guy’ and the likes.

Unfortunately, close to the end of that round (SS1), someone, more specifically, COVID came and scattered our game. What a life? Luckily with the help of our hardworking teachers, no nonsense administration and our ever hands-on parents, we rebuilt the board online.

When we resumed physically, another move was made against us: some of us pawns were raised to the position of knights although some of us -Chukwudi- thought they were kings. Don’t worry, Homakom was always there to keep them in line. This caused a sort of rift amongst us as the days went by but as the end game gradually approached, we grew closer, learnt those formations I mentioned earlier and more and we formed a bond like no other.

We were ready for the last lap. Lol, the last lap. How many of us have heard this phrase from our parents more times than we’ve heard our name? This was a tedious round for us. We were haunted by words from our Man O’ War: 25% casualty and *the cropray for more! These were casualties we could not afford to have as a set of only 76 students at this point.

Days to weeks to months to years, the game went on in a rage but this right here *point to chess board* was the stage, where boys would turn to men, in the 28.4 hectares den and girls to women over and over again.

As the game drew near to an end, we showed everyone what we were made of. We played our best moves: Moby D’s 1570 in SAT, Mamdo, Akanno and Mofe’s InterswitchSPAK feats- wait, where is Akanno?. Oh, ok, he is here, I thought he had gone for another competition again without telling us. Back to what I was saying. MITMof earned his name, David Peter’s full-ride, Texas A&M’s package in Okexx’s locker, Ewa’s UBC, VanderBud, Mmeli to DePaul and the case that is an Ebuka and Amaka duo. If I keep going, I won’t stop, but that just shows you how much we have done. They thought that was all…oh, boy were they in for much more.

We played our part in the game. I mean that quite literally from Beleku to Akogun to our King Onome, his beautiful wife Otubu and to our own Ignatius and Francis Regis, even the market women who so dutifully died when they were asked and resurrected when they were not asked. We have performed so well that by now everyone is expecting Black Pink to have signed Onyinye, P-Square’s biggest fan Iyidobi to have hacked into Google, Area 51 to have toppled the Royal Dance Academy, Manchester to be hustling Sammy (United, of course) and Zank (for him, that will have to be City) and Moyin, Bekus and Moby D to have programmed the code to make Nigeria great again (at this point, miracles are what we need).

Charis and Fadeelah are making their way to the Olympics. Jakes, Abas and Adenrele squabbles over whether it should be Atiku or Peter Obi next show that we have future politicians among us. YaCut and Uju’s daring hairstyles adorn our next Top Models. Folu can quite literally give you the meaning of any word as is used in the context. Mercy and Ene mixes can put DJ Neptune to shame (so long as Lagbaja is there to accompany them) and have you seen Marvin dance before? Kelechi is his only worthy competition.

In third term, we were no longer sure whether we still attended a boarding school, looking at the number of times we went home. AirPeace, Arik, Ibom Air, we’ve funded you o! We came back to school ready to finish the last stretch, and we came up with many fun activities, such as starting series in the Common Room, going on weight loss regimes, and creating Inter-Class Sports (which D class was definitely going to win; I mean, did you see Iloka and Balams on that court?). We even started money making ventures: House of Franny make-up studio to Get Jiggy with Dada to Tobi’s Salon to Awele’s food store to many others.

It’s incredible how much we have grown these past few years, both literally and figuratively; We marched onto the chess board, starting off our game relatively small, barely scraping five feet tall. And now, even the tallest amongst us wield achievements far higher than our imaginations – I mean, McToms is going to Germany! Did you see Nurse Dexter’s JAMB score? As if Jeffrey should not already be in the NBA.

After these six years we’ve spent at LJC, we’ve gone through all the college has to offer, and made memories that will definitely last forever. We’re indescribably grateful to everyone who helped us get this far: the administration that was never slow to admonish us when we did wrong and praise us when we achieved great things, Mr K and Mr Sam for letting us use systems even though  Fr. Chikere “doesn’t tell staff stuff”, the maintenance staff for fixing SS3C’s class door nothing less than six times this session, the kitchen staff and Tise who refused to drop badge for overfeeding us during extension, Sr. Tina for giving us hair and make-up and the production staff for letting us sample our beloved sliced bread once in a blue moon.

The greatest gratitude goes out to us, the set of 2022 for allowing ourselves to be molded in line with the Ignatian Spirituality. Individuals like Moyin show us we’re never too young to change the world, as he started his very own Davin Software foundation to help underprivileged youth empower themselves through technology. In each and every face in this set, I see a lesson to learn, a promise to be made, and a crucial part of our future in this country.

We are unbeatable and it is with eternal gratitude to God and this beautiful community that we step out to the world caring for all, sisters and brothers in true Service of God and Others.

At this juncture, there’s only one thing left to say. Checkmate.

Representative of the Graduation Class of 2022
Uzoamaka OZO-UDEZE